On 15 May 2018, at 15:17 UT, Uranus first entered tropical Taurus and will stay there during nearly seven years. By its complex direct–retrograde motion pattern (see zoomable chart), it turned retrogrograde on 7th August, 2018 (at 3° TAU), and returned to Aries on 6th November, 2018.

The second ingress into Taurus will happen on 6th March, 2019. After several direct and retrograde phases, Uranus first will leave Taurus on 7th July, 2025, but it will move backwards and return to Taurus again (8th November, 2025), and will enter ultimately Gemini on 25 April, 2026.

As at the moment of this ingress (that is the ’skeleton’ of the whole cycle of 2018-2026 – see zoomable chartwheel) Uranus has an exact square from Capricorn Mars, and (Sun conjunct Moon) will be in conjunction with the strongly violent fixed star ’Algol’, opposing Jupiter, we may suppose that Taurus Uranus will manifest probably its disharmonic analogies: real estate crashes, stock exchange turbulences, dismantling of traditions, earthquakes, volcanic eruptions or other disasters concerning real properties or farmlands.

Uranus’ retrograde phase began on August 7, 2018 at 02° Taurus and ended on January 6, 2019 at 28° Aries. (Indicating anxiety, spasms, neurotic behavior or unexpected incidents – mainly for those who have a natal retrograde Uranus with disharmonic aspects (opposite, square, semi-square) to one of these actual ’transiting’ positions (between 2° Tau and 28° Ari). Of course, these analogies are in effect in the ‘mundane’ context too.)

The last transit of Uranus in tropical Taurus has occurred from 1934 to 1942, it was the period of considerable political/economic transformations worldwide and the first part of the WW II. 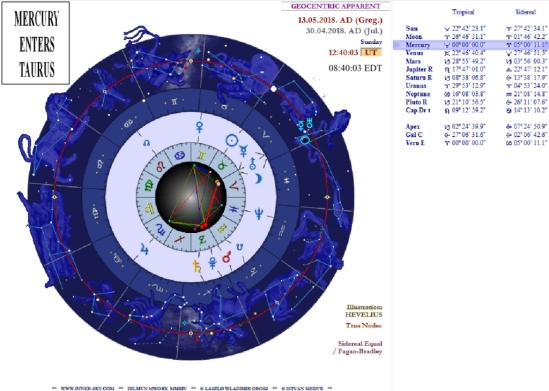 Mercury will enter tropical Taurus on May 13th, 2018 at 12:40:03 UT (08:40:03 EDT). It will be at the same time in the sidereal Aries and the constellational Pisces, in conjunction with Uranus and Moon. (see zoomable chartweel)

‘Mercury in Taurus gives a mind that is not very soon made up but when it has once arrive at a conclusion it is almost as difficult to change as the laws of the Medes and Persians. However, being based upon thought and reason the judgment of these people is also extremely reliable. They believe thoroughly in the ancient adage that “Silence is golden” and are therefore close-mouthed. They are good counselors and can be depended upon to keep secret. At the same time they are not recluses, but have a pleasant, sociable disposition. They are fond of fun and recreation, they love music, art and literature, so they are thoroughly likable people if Mercury is well-aspected. But if Mercury is afflicted they become what the Scotch call “DOUR,” also obstinate, stubborn, secretive and avaricious.’ (Heindel)

Actually, it is the juncture of the formative power of the Fire (Sun) and the highest intuitive stream (Uranus), in the inflexible ’substance’ of the tropical Aries. That meeting, in the case of an instinctual intermingling, may result in a riotous ravage; but, in the event that these forces become equalized and the solar principle can preserve its ruling force, this is nothing less than a necessary and useful transmutation, the opportunity to create novelties instead of lugging the utterly blank habits.

Anyway, in the medical astrology, because of the high levels of a persistent inner tension, Aries Sun conjunct Aries Uranus, with an afflicted Moon or Mercury in the natal chart, indicates a severe inclination for stroke and several cardiovascular disorders in every case and in every astrological house. 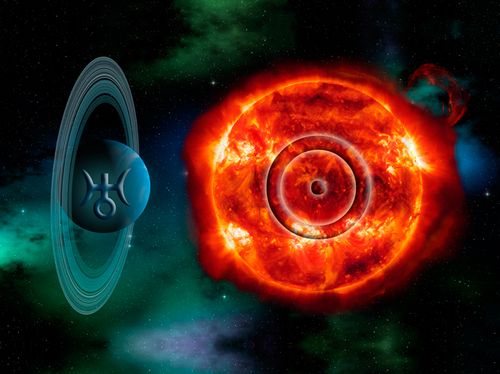 A total solar eclipse will occur and be visible on Monday, August 21, 2017, within a band across the entire contiguous United States (for the best places and other details click on zoomable chart). This eclipse will happen in Leo – which now means, as you can see in the attached chartwheel, simultaneously tropical, sidereal and constellational Leo.

During totality, the brightest star in Leo, Regulus will be visible just to the left of the eclipsed Sun, while Mercury is further to the left and Mars is to the right (see chart).

As the eclipsed Sun will be in close conjunction with the fixed star Regulus that is the ’par excellence’ Royal Star, symbol of the Power and Authority, it indicates ’violence, trouble, ultimate disgrace, ruin, sickness, fevers or benefits seldom last’ (by V. Robson) and such analogies for the next period, concerning mundane astrology. This is compounded by the fact that Mars (at the foreleg of Leo) become visible near the eclipsed Sun which was considered as omen of discord, quarrelsomeness, war or some kind of calamity by ancient Seers.

The last ’coast-to-coast’ total solar eclipse that traversed the entire contiguous United States happened on June 8th, 1918. This would be simply an establishment of facts without any suggestions, that – using Jungian terminology – it was ’synchronistic’ with the spreading of the 1918 flu pandemic which was an unusually deadly influenza; it infected 500 million people around the world, and resulted in the deaths of 50 to 100 million (three to five percent of the world’s population).

But it is indisputable that this kind of consideraton of the principles of the ancient ’mundane’ astrology is not ’all-powerful’ in our time, we can remember the great European total solar eclipse in 1999 that did not entail enormous, far-reaching and ’scenic’ mundane events at all. 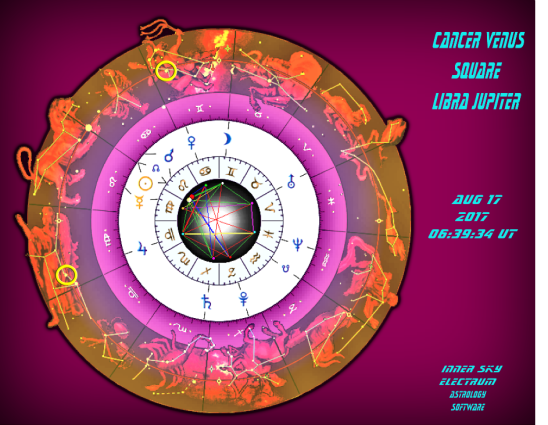 Venus square Jupiter will happen on August  17th, 2017 at 06:39:34 UT (02:39:34 EDT. Venus will be in tropical Cancer and Jupiter in tropical Libra (while within the sidereal  & constellational framework those will be staying  in Gemini and Virgo).

For natives having this aspect in their radix chart, the world order (Libra Jupiter) and their own capricious and hiper-sensitive mental/emotional  aspirations (Cancer Venus) are in a seemingly unresolvable conflict (symbolized by the ’square’).

They live under this constant pressure and should act according to their own ’inner scheme’. Because of their infantility, they vainly look for balanced conditions, being, to say the least, permanently offended  or frustrated (afflicted Cancer Venus), unable to become thoughtful ’observers’ and put some distance between their own mental sphere and the objective events. They are always involved in emotional swirls of some sort that – without a strong Saturn – seem almost uncalmable.

Amidst real inner and outer controls, these Cancer Venus square Libra Jupiter anomalies can manifest as more on less ’innocent’ hysterical outbursts, paroxysms or  ’trolling’ acts, but those can be very harmful and destructive if someone – like a ’Caligula 2.0’  /he had an afflicted Cancer Venus in his natal chart/ – has the needed power and possibility  to implement his/her abnormal mental flooding, capriciousness and intemperance.

In the tropical context of the birth chart, Leo Sun trine Sagittarius Saturn indicates recognition and success, but – because of the ’saturnine contribution’ – those are often delayed till middle life. With this aspect in their radix charts, if natives come to a decision – which is generally somehow ’fiery’ and highly idealistic, thanks to the characteristics of the tropical Leo and Sagittarius signs – they will never swerve therefrom and ready for moving heaven and earth to finish the project on schedule. By this approach, we can evoke the mythologem of Heracles, the greatest of the Greek heroes, and his twelve difficult trials, that required huge power and persistence, for gaining the utmost award, the immortality.

Therefore, now you can leave mediocrity and try to be simply exceptional: this time is suitable for everyone to start any demanding – id est: ’Herculean’  🙂 – tasks.

A partial lunar eclipse will take place on August 7th (or 8th), 2017, the second of two lunar eclipses in 2017. The Moon will only be slightly covered by the Earth’s umbral shadow at maximum eclipse. See zoomable chart showing the geographic regions of eclipse visibility. During this eclipse, the Moon will be in the constellation Capricornus, sidereal Capricorn and tropical Aquarius.

(Partially) eclipsed  Moon indicates (partially) affflicted status of lunar energies, but, of course, it suggests some mental or concrete ’restoring’ actions depending on the actual qualities of the given celestial context . The occult influence of this actual eclipse may hit mostly those who have a natal Moon near the 16th degree of tropical Aquarius, or have any planets (in their birth chart) ’somewhere nearby’ with any disharmonic aspects to their natal Moon.

As Libra Jupiter throws a trine to the Aquarius Moon and a sextile to the Leo Sun, it will be a good time to balance excesses and extremities of the individual paths with philantropic (and/or ’environmentally friendly’, ‘animal friendly’ etc.) activities or any other deeds based upon the will to re-establish social or moral justness and inner equilibrium.

On July 30th, Mercury reaches its greatest eastern elongation of 27.2 degrees from the Sun. Generally, this is the best time to view this planet since it will be at its highest point above the horizon in the evening sky, but because of the angle of inclination of the ecliptic plane to the horizon, that is depending on geo-latitudes, people living in northern hemisphere cannot catch sight of Mercury with the naked eye now, they need at least a good pair of binoculars… But people from Australia, New Zealand, Brazil, Argentina or Chile have very good chance for it. In some of my recent posts I wrote in detail about Mercury’s astro (- nomical/logical) connections – one of those:

Anyway, to better understand the celestial background, view this zoomable chart above.

The Delta Aquarid meteor shower usually occurs every year between July 12 and August 23, this year best time to watch the sky is around July 27 and July 30, when the shower reaches peak intensity.

The shower originated from the breakup of what are now the Marsden and Kracht Sungrazing comets. The Delta Aquariids get their name because their radiant appears to lie in the constellation Aquarius, near one of the constellation’s brightest stars, Delta Aquarii (in the right ankle or shin of Water-Bearer), widely known as ’Skat’ among astrologers (see zoomable chartwheel). By George Noonan, this ’fixed star’ gives good fortune and lasting happiness and also it is said to indicate safety in a deluge. Ancient Chinese actrologers knew it as ’Yu Lin Keun’, the ’Imperial Guard’.

The Delta Aquarids is an average shower that can produce up to 20 meteors per hour at its peak. This year, the crescent moon leaves dark skies for what should be a good early morning show. Best viewing will be from a dark location after midnight. Though meteors will radiate from the constellation Aquarius, they can appear anywhere in the sky. 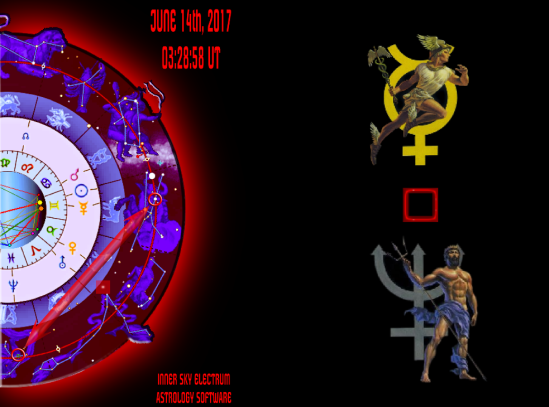 Mercury square Neptune will occur on June 14th, 2017 at 03:28:58 UT (06.13. 23:28:58 EDT), in constellational Taurus/Aquarius, sidereal Taurus/Aquarius and tropical Gemini/Pisces. Gemini Mercury square Pisces Neptune indicates a chaotic mind, liability to lack of memory, indolence and, if Saturn is also afflicted (as it actually is), disposition to dream the time away, sometimes alcoholism or using drugs. There is often a restless desire for fame, yearnings towards unreal and unaccomplishable goals and an inability to fit in anywhere. With an afflicted Jupiter, this aspect predisposes to fraud, deception, mendacity and slander; with a strongly afflicted Sun, because of the weakened self-esteem and self-worth, the native may incline to commit suicide. >> More Info