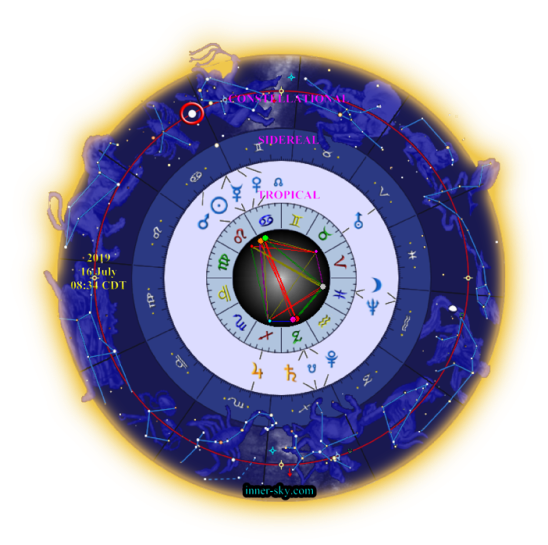 As a creative mind, Dane Rudhyar (1895–1985), American astrologer, came up with a noteworthy theory, having drawn analogy between the ’celestial  mechanics’ of Mercury and the human personality types. To demonstrate it in an expressive form, he chose two mythic brothers, Prometheus and Epimetheus, sons of a Titan and an Oceanid.

I should bring up now some needed astromical facts. Mercury’s orbit is very eccentric, thus its orbital speed around the Sun may vary considerably ranging from a standstill at its stations to over 2 ¼ degrees at its ’superior’ conjunction. Mercury’s cycle around the Sun takes 88 days, but its synodic cycle with the Sun averages 116 days. (Due to its elliptical nature this may take anywhere between 105 and 130 days.)

The cycle begins at the ’inferior’ conjunction which is the midpoint of Mercury’s retrogradation cycle when the Sun and Mercury rise together. But, as we experience, the Sun now begins to move forward, distancing itself from Mercury which is retrograding. Now, Mercury rise before the Sun, i.e. it is a ’morning star’.  About 10-12 days later, Mercury goes direct and in a fortnight reaches its maximum distance from the Sun or its ’greatest morning elongation’. Both the Sun and Mercury are now travelling about the same speed (i.e. a zodiacal degree a day). Circa six weeks later, Mercury will be seen as conjunct the Sun, its ‘superior’ conjunction. Sun and Mercury rise together again, but since Mercury is travelling its fastest in the cycle, it pulls away from the Sun, leaving the Sun to rise before it. Mercury is now in its occidental half of the cycle, and now it follows the Sun, thus becomes the ’evening star’. Five or six weeks after the ’superior’ conjunction, it will reach its ’greatest evening elongation’ from the Sun. At this time, the Sun and Mercury are again travelling the same speed. About a fortnight after, Mercury will station and turn retrograde, preparing for its next ’inferior’ conjunction on the verge of a new cycle.

Let’s look closely at Rudhyar’s theory. (As a remark: some astrologers consider this approach as good and applicable, however, others can’t accept it – but this is not surprising in the case of a modern astrological theory.)

The Moon will pass through the Earth’s shadow on 16th July, between 20:02 and 20:59 UTC, creating a partial lunar eclipse in the tropical Capricorn (but within the constellational Sagittarius). The eclipse will be visible any location where the Moon is above the horizon at the time, including from Africa, Asia, Europe, South America and Australia (see attached image) 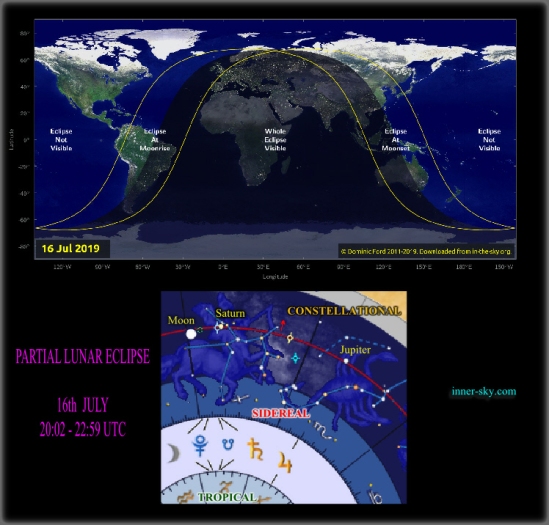 (Partially) eclipsed Moon indicates (partially) affflicted status of lunar energies, but, of course, it suggests some mental or concrete ’restoring’ actions depending on the actual qualities of the given celestial context . The occult influence of this actual eclipse may hit mostly those who have a natal Moon near the 24th degree of tropical Capricorn, or have any planets (in their birth chart) ’somewhere nearby’ with any disharmonic aspects to their natal Moon. 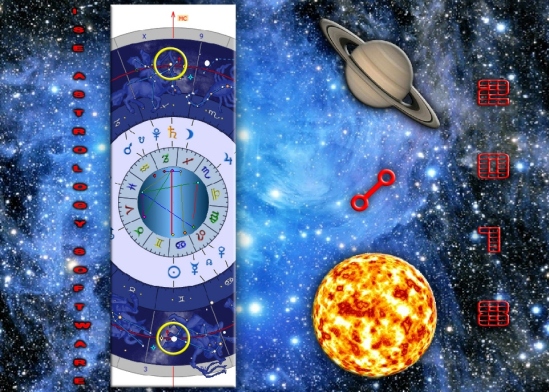 Saturn is staying now  in tropical Capricorn, sidereal and constellational Sagittarius, among ’the stars of the Bow’. These days, at its opposition, the ringed planet is the closest to Earth, fully illuminated by the Sun, thus it is brighter than any other time of the year and will be visible all night long. This is the best time to view this planet with the naked eye, at midnight it will be close to Midheaven (Medium Coeli), but the light of the (almost full) waxing Moon will disturb the eyesight in some measure.

The zoomable chart below shows the most important info about Neptune’s complete retrograde cycle (2018-2019) including ’Pre-Shadow’ and ‘Post-Shadow’ Phases. 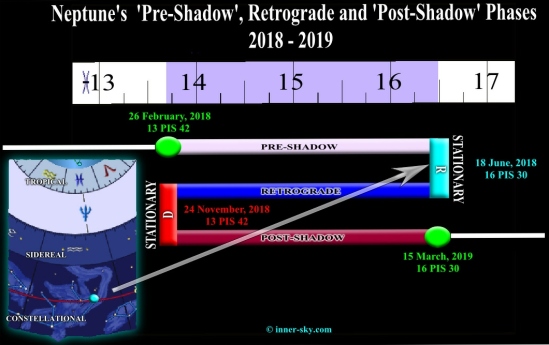 Gemini Mercury trine Aquarius Mars indicates a keen, sharp, ingenious and resourceful mentality. It makes the person enthusiastic over any proposition which appeals to him/her, having also ability to enthuse others and impress them with the own views. He/she is interested mainly in idealistic, intellectual or philanthropic themes, loving argument or debate and having an inexhaustible fund of wit and good humor, sometimes blended with a vein of sarcasm which always strikes its mark, yet never viciously nor maliciously. He/she often has remarkable dexterity doing tasks with a speed, facility and expedition that is astonishing.

The Nakshatra Anuradha is ruled by Mitra, the Divine Friend. This is the 17th nakshatra of the zodiac, spanning from 3°-20′ to 16°-40′ in the sign of Vrishchika (sidereal Scorpio). Anuradha Nakshatra gives balance in relationship, both honoring others and seeking ourselves to be honorable.

By traditional interpretations, ’The Moon in Anuradha indicates someone who has balanced friendships and relationships and is co-operative, loving, popular, and successful. They are good leaders and organisers and are focused on their goals, but they are also good at sharing. They are sensual, and love variety and travel. They are faithful and devoted to those they love, but they can also be jealous and angry.’

Gemini Mercury indicates a person fond of change, travel and creative work. He/She is always ready to investigate some new thing, or go to some other place for a change; in short, almost anything that is new appeals to him. At the same time if Mercury is well-fortified such people gain greatly by this fluidic state of the mind for they are shrewd and penetrating in their judgment so that they know good value when they see it and are not prejudiced by preconceived, set opinions.